Guys.  I feel like I’ve struck a gold mine in the sleeping department and am suuuuper stoked to share my latest sleeping secret:  I use a weighted blanket to comfort myself to sleep. 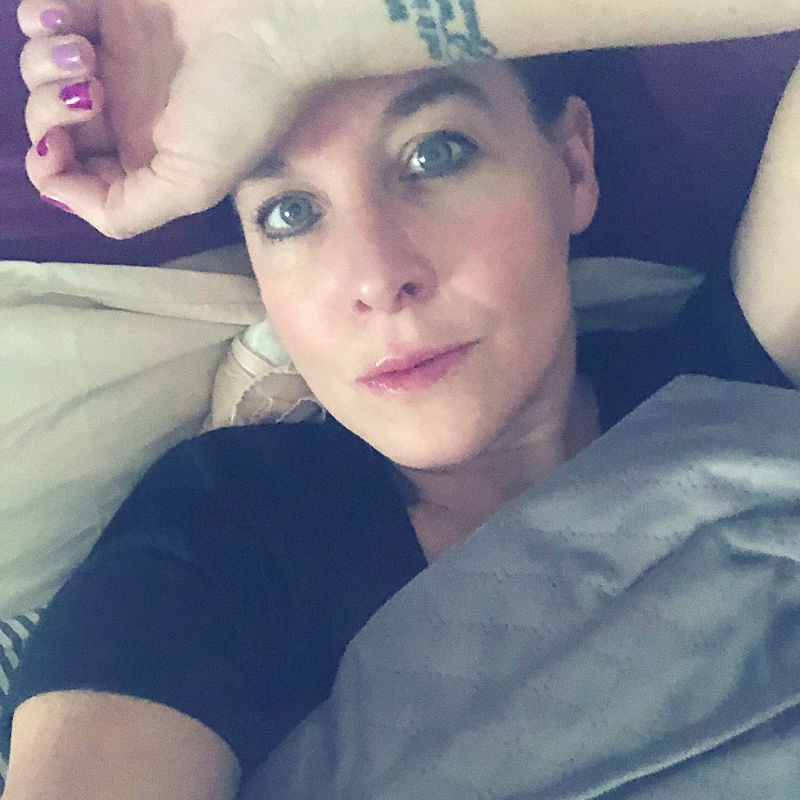 I also, just generally sleep kinda shitty.  I always have nine million things on my brain (trying to get better at this as per my 2019 resolutions) and sometimes I think I’m being visited by..uhhhh…ghosts (it would take an entire post series to explain that one, so I’ll just leave that there for pondering). 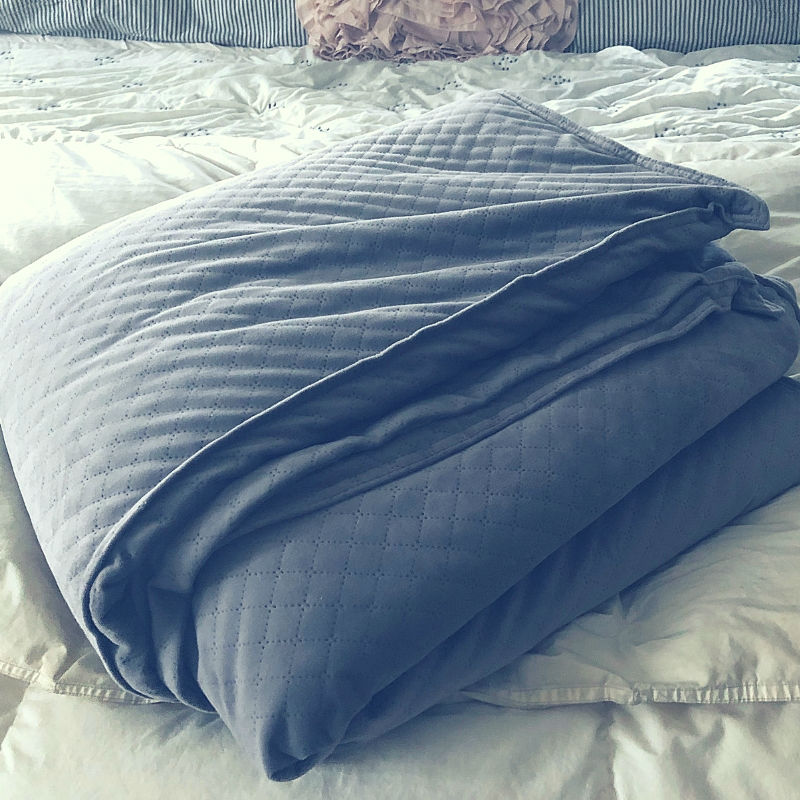 Anyway – because of the above AND BECAUSE I’m completely incapable of watching an infomercial without buying the “thing” (hey there Shamwow, every Beach Body video ever made and that chopper thing that makes your veggies look like flowers), I was destined for this purchase.  If you’re on Instagram, you know that every B-list celeb in America is showcasing their weighted blanket, so its a miracle I didn’t get it sooner.

THERE ARE STUDIES ON THIS KINDA THING

The theory of using a weighted blanket to sleep is not a new theory at all.  In fact, parents have been using them for years in helping to create a sense of calm for their kiddos (including children with Autism, ADHD, Anxiety and general issues sleeping or finding calm).

More recently, studies have shown that weighted blankets can provide many of the same benefits for grown-ups who suffer from insomnia, depression, and anxiety (among other thangs). 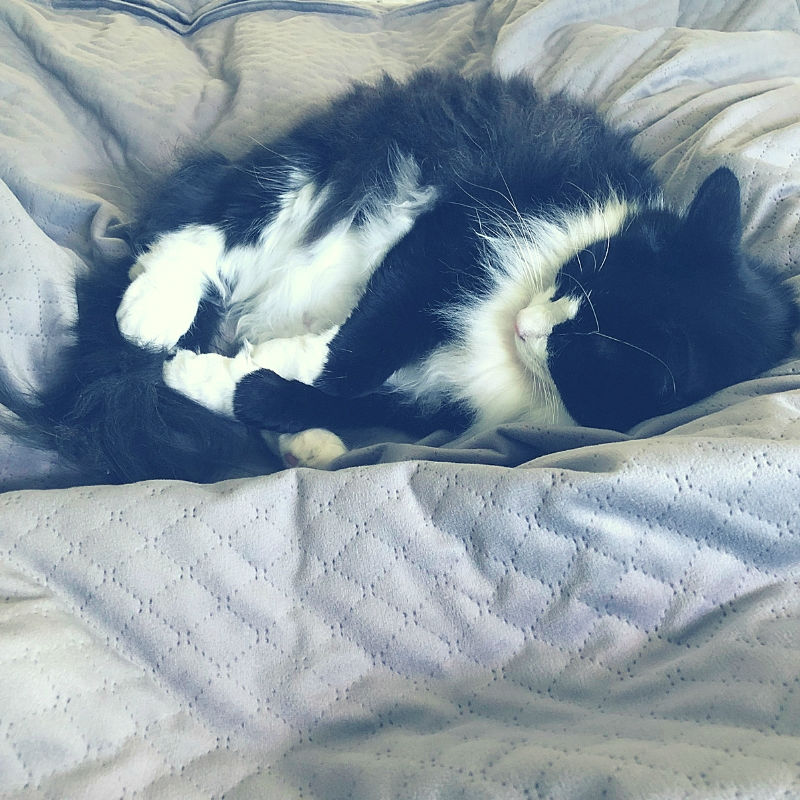 Just be careful if you have pets.  Ours like to sleep on top of them, but I always make sure they can’t get under it.  Fifteen pounds of blanket on a 10-pound cat is a huge safety risk. 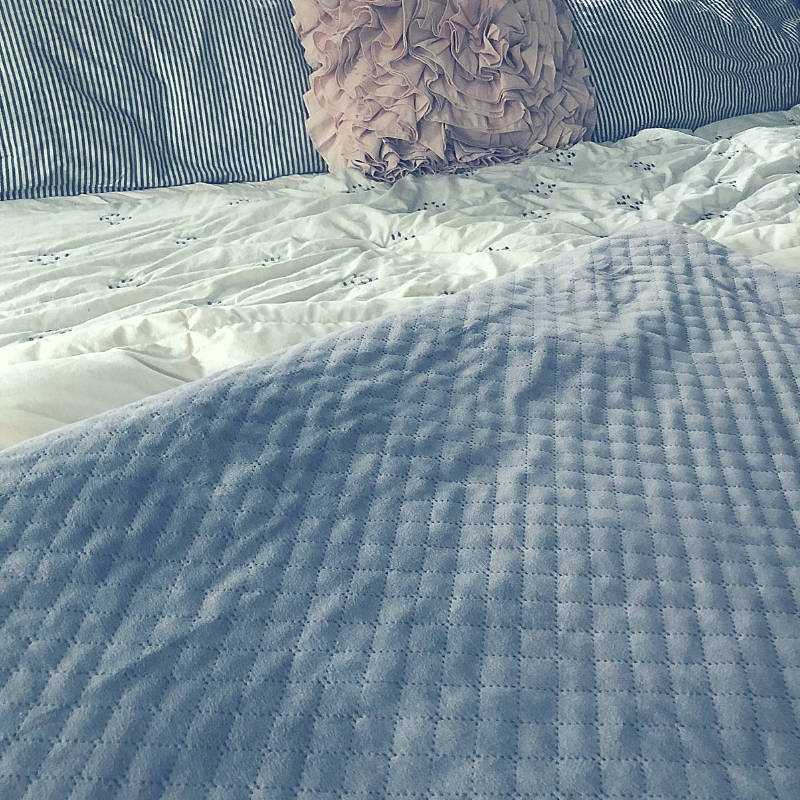 It’s super soft. While I can’t attest to the quality of other weighted blankies, I can tell you that the Blanquil version is ridiculously soft and super nice quality (probably why they charge just shy of 9 million dollars for it).  As mentioned, mine came with a cover (like a duvet cover) that you can remove to wash or regulate temperature.  But there are cheaper versions that don’t have the removeable cover if you don’t think you’ll need it. 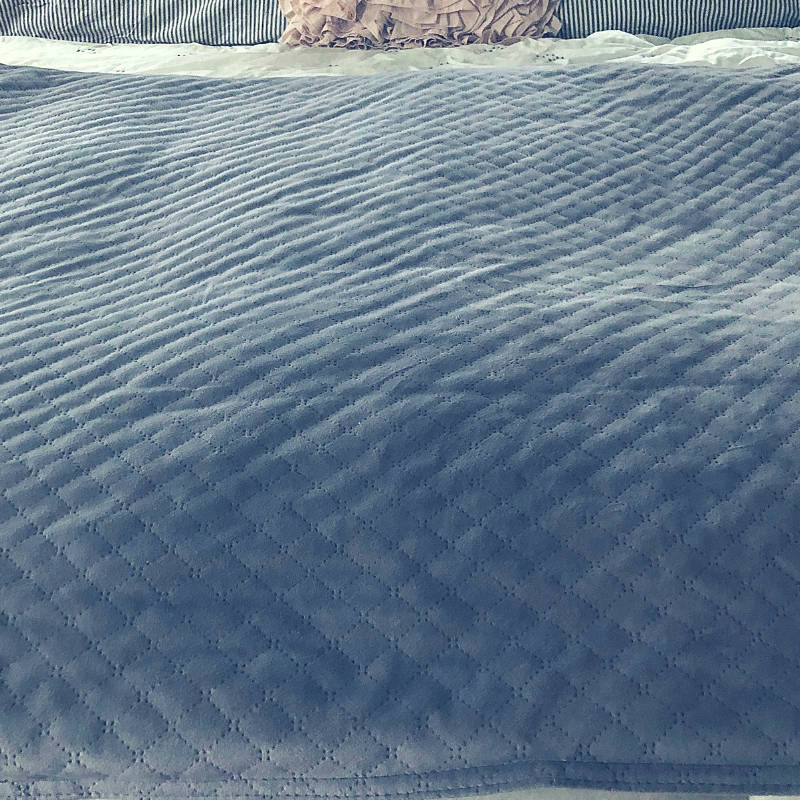 It’s super heavy.  I ordered the 15 pound weighted blanket and am glad I didn’t order something heavier (I’m pretty sure they offer 20 and at least 30 pound, maybe more).  Fifteen pounds on your body is heavier then you might think, so for me, the weight of my weighted blanket was perfect.

I REPEAT, IS IT AWESOME?

Beyond the basic stuff (soft, heavy, cozy) sleeping with a weighted blanket has most definitely helped me sleep better.  Here’s what’s weird about it though.  The research says that a weighted blanket feels like getting a firm, but gentle hug which calms and relaxes us.  Not that I’m a prude in the sleeping department, but this girl?  I don’t like to be hugged all night.  I like to snuggle, don’t get me wrong, but having someone on top of me all night in a warm embrace would feel like shackles.  I like to move and grove in my sleep, so in theory, a weighted blanket would be a nightmare for me. 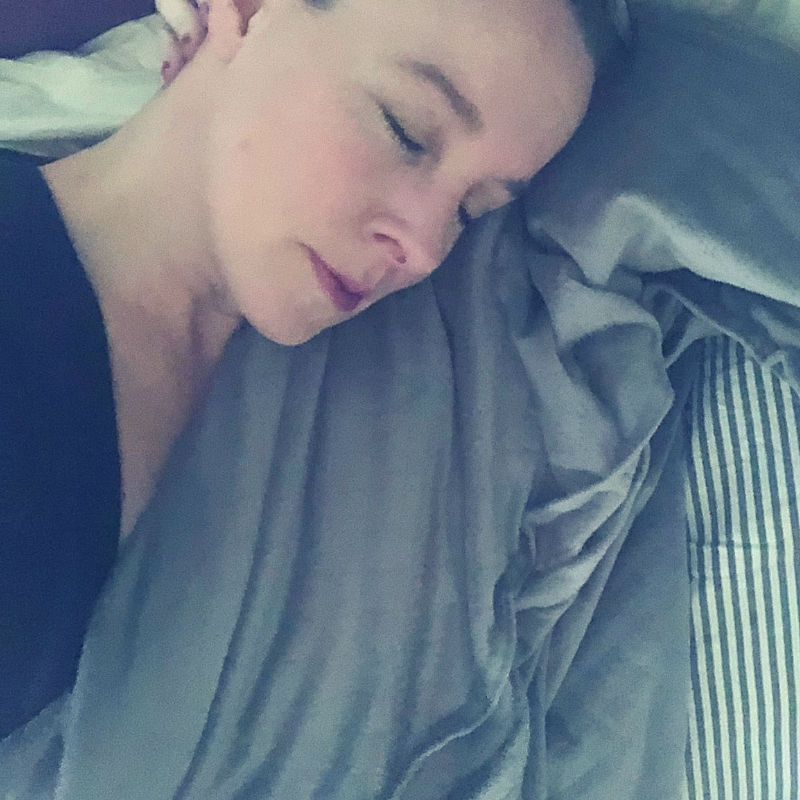 But, it’s not.  Maybe its the equal distribution of weight or the fact that it keeps me in vampire position (as my husband calls it.  This is typically how I fall asleep – a vampire in her casket).  Either way, it does comfort me in a way I didn’t expect.  And, it allows me to close my eyes, clear my mind and just sleep. 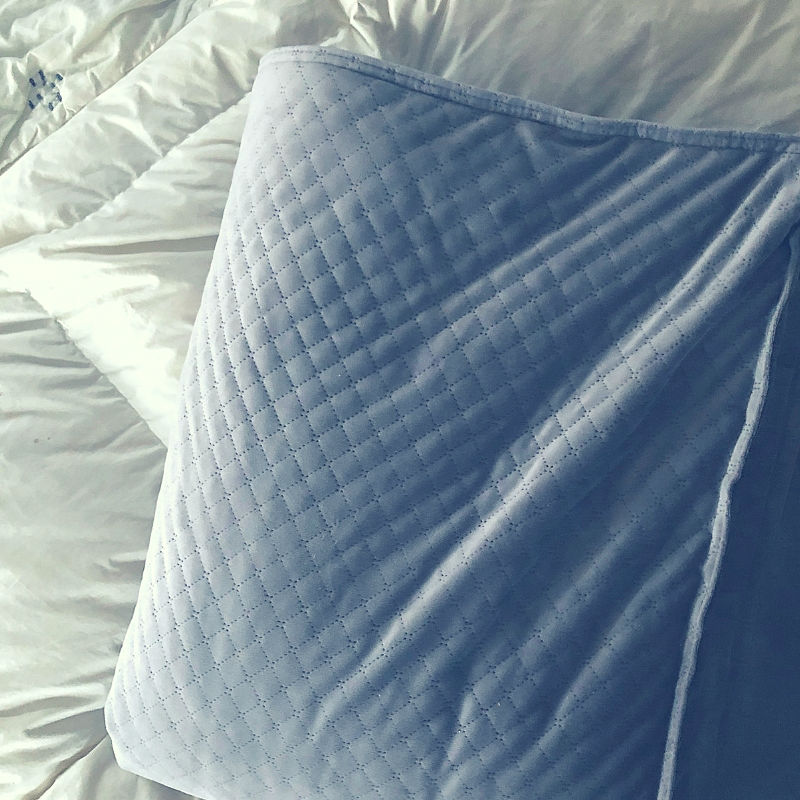 Since I’ve been using my weighted blanket, I’ve noticed I’ve been falling asleep easier, sleeping “harder” (if that makes sense) and waking up feeling really rested. 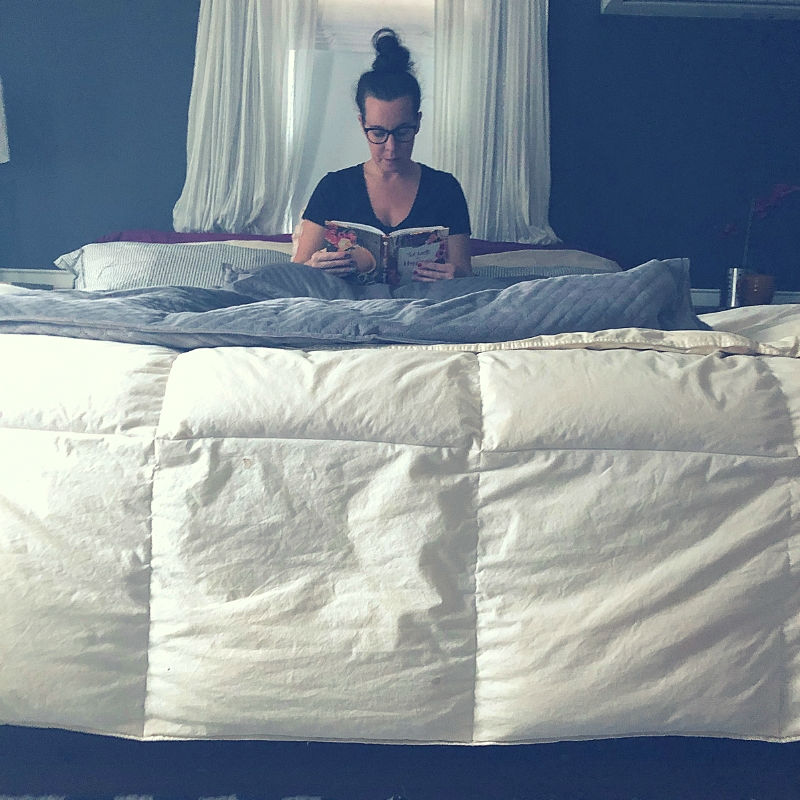 I also use it when I want some serious downtime (you know, for reading and just vegging out).  There’s something really soothing when you’re reading a good book with a heavy blanket on your lap.  Maybe that’s what they’re talking about with the “hug” thing.

There are a few downsides for me – not total deal breakers, but sorta annoying things that come with being the owner of a weighted blanket who may or may not get moody at certain times of the month. 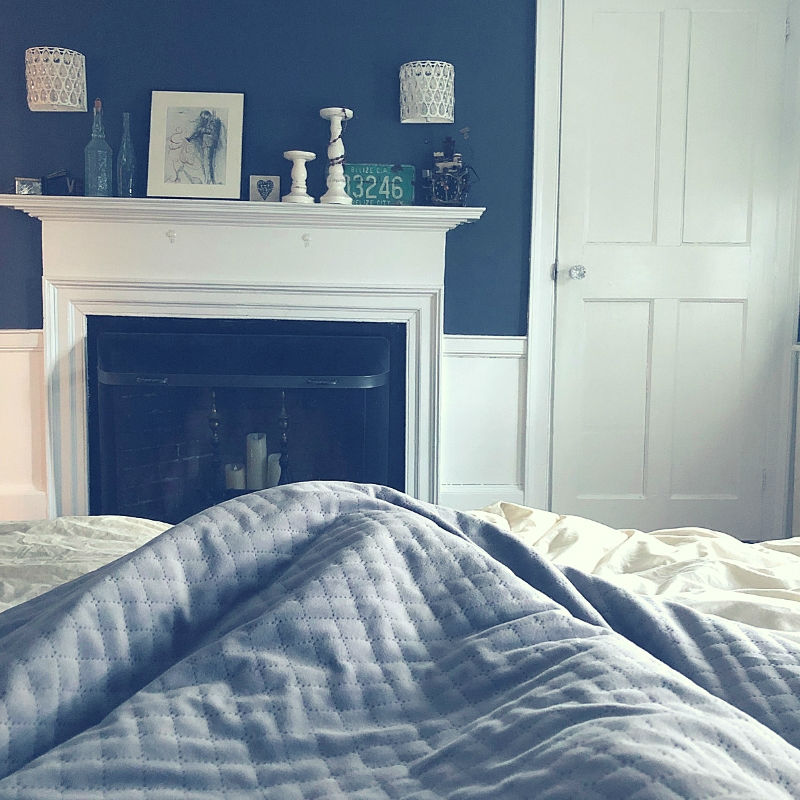 So, for one week per month (you know “that time”), this is what happens:

It gets hot.  In my weighted blanket’s defense, I like to sleep in a nest at night, so I haven’t replaced my down comforter with the new weighted blanket – I merely plop that bad boy on top.  So, it’s like sleeping under an inferno some nights because I have 37 blankets on my bed now. 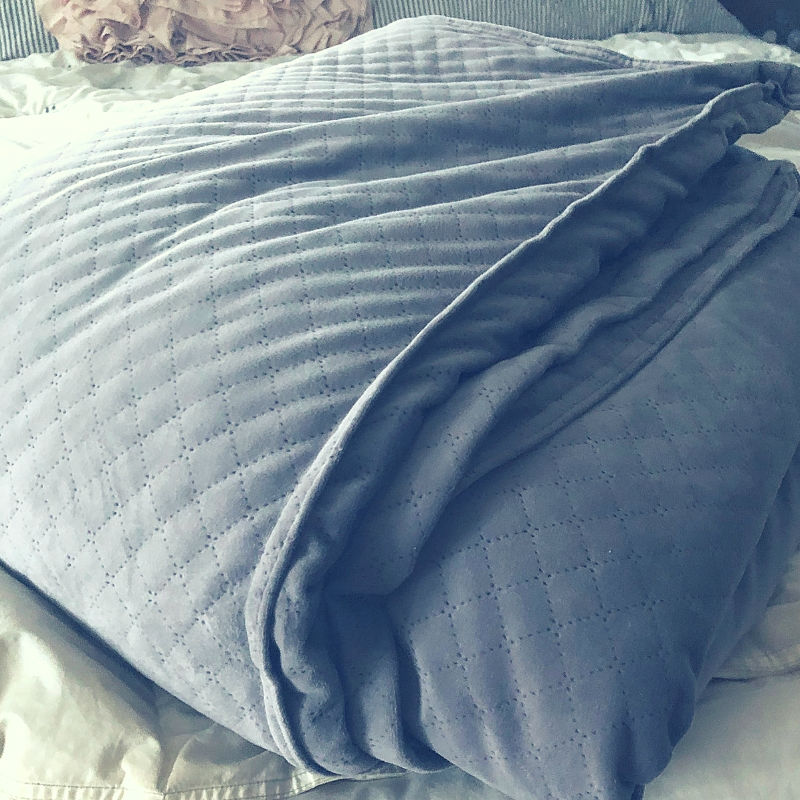 It falls off the bed.  When I’m not kicking it off the bed (a la points 1 and 2 above) it sometimes slips off (halfway, of course) which is annoying but not completely unmanageable.  On those nights, I assume I’m thrashing about in bed, causing the blanket to slip, so you know…not the blanket’s fault.

WHERE TO GET A WEIGHTED BLANKET FOR YOURSELF

All in all, downsides considered the weighted blanket was a solid purchase and is totally helping me get better sleep (at least 3 weeks per month which I will totally take).  As mentioned above, I got mine through Blanquil, but there are a bunch of places that sell them these days including:

If you’re looking for a weighted blanket for your kiddo, check out this roundup on Huffpost.

So yeah…I’m a grown woman who sleeps with a weighted blanket and don’t see that changing anytime soon (except for 12 weeks out of the year when I’m PMS’ing and unable to find comfort in anything).  Such is life. 🙂

WANNA KNOW HOW I’M SAVING ON GROCERIES THIS YEAR?

*DISCLAIMER:  This post is a combination of my personal insights, opinions and thoughts on various topics and products and may contain affiliate or referral links.  I earn a small commission if you make a purchase through my links, which helps me continue on this fabulous journey of blogging!  Full disclaimers avail. here. 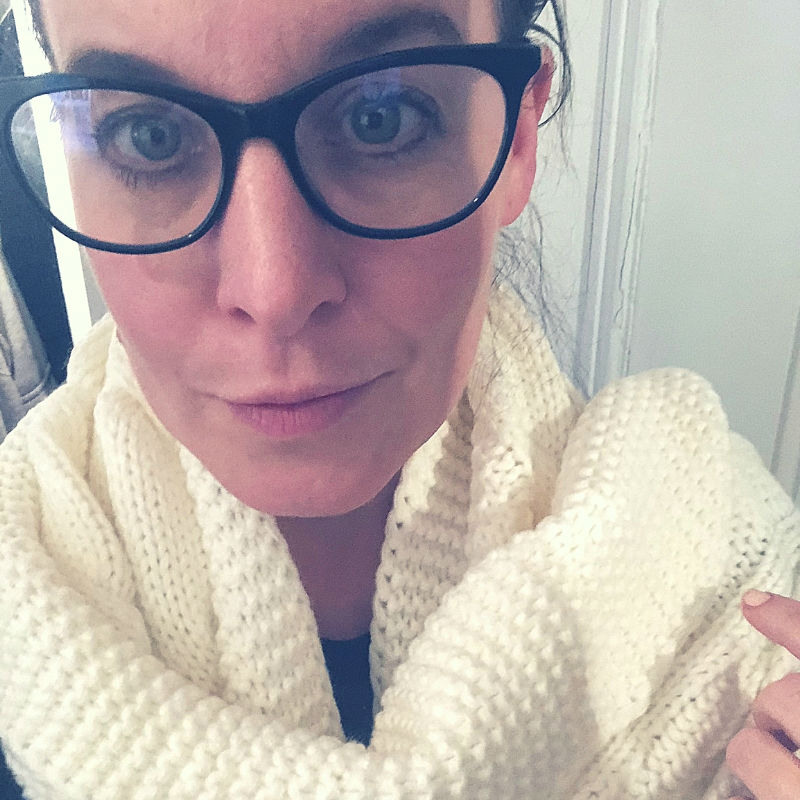 Goal setting for 2019 (self Care, reading more & generally being awesomer at all the things) 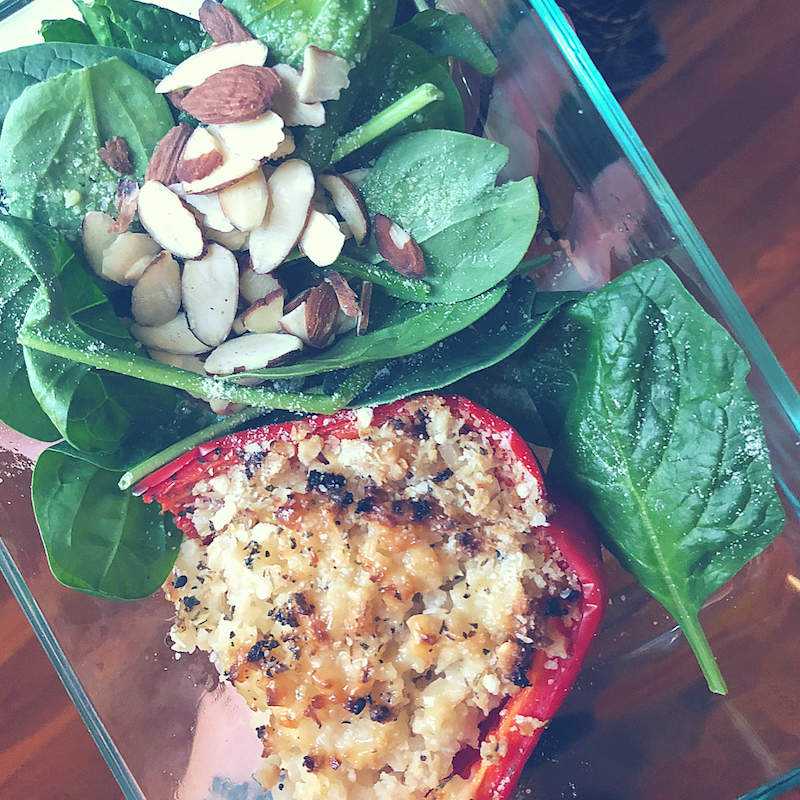 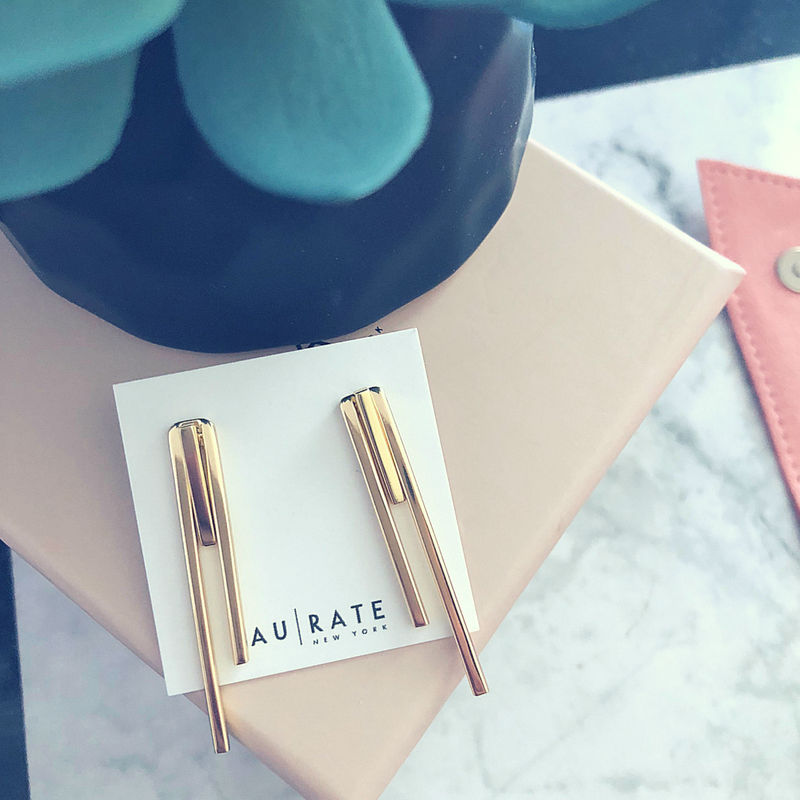